We played our first music festival and found it to our liking. I don’t know if it’s just the amazing people that go to Worldfest or the amazing Nevada County fairgrounds, or the amazing weather, but every minute we spent up there was pretty fantastic.

After some running around trying to find the place where musicians are supposed to park, and all the other little things we had to get in order before we could play, we were able to load in at the Discovery Stage. The good folks running the stage, Kyle and Tree, set us up quick and made sure we had everything we needed. We hit the stage at 12:30 sharp to a standing room only crowd.

The show went gangbusters, and everyone had a good time.

After it was over, we headed to the “Artists Lounge” to hang with the other acts.

I guess it just doesn’t get rocking until later in the day.

On our way to get some food we came across a pedal powered dragon and had to hop on to take a ride. 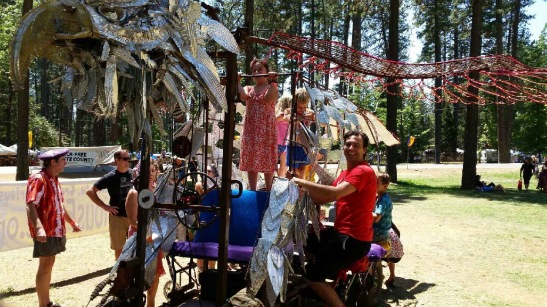 The food on offer was top notch. It was really hard to decide what to get. When we’re out on the road we like to try foods we’ve never thought to eat, and Worldfest had plenty of choices. We ended up splitting an order of grilled salmon and fried plantains. See it and weep foodie fans.

Well played and well fed we took a little break before heading out to check out some of the shows. The best act we saw was a band of ukelele players and percussionists from LA called Las Cafateras. We’re not just saying that because uke and percussion bands are the best because we’re biased, but they totally are.

Hopefully we’ll see you again next year Worldfest, thanks for the memories!